The Cleveland Indians got off to a less than stellar start in 2014, with a 10-17 record in April. Thereafter, the team played playoff-caliber baseball the entire year. They weren’t eliminated from the playoff race until the season’s final week, just five games behind division leading Detroit. Had they not had an unusual string of bad luck (errr, health), they may well have clinched an American League Wild Card berth instead of rival Kansas City (and we all know how THAT turned out). Injuries to their leadoff hitter, second baseman, and primary designated hitter were just three of the injury-related catalysts that hindered the overall success of the Cleveland club. Even with that dark cloud looming, there was a light at the end of the tunnel—in fact, there were many.

Corey Kluber took a leap forward into the spotlight with a Cy Young Award winning season. His 7.4 WAR was tips in the junior circuit.

Teammate Michael Brantley surprised even his most ardent supporters with a season that warranted MVP consideration, well, maybe in a league that didn’t include Mike Trout. Still the toolsy outfielder finished 2014 with .327 batting average and a 20/20 season to his name. When you also consider that the Indians staff led all of baseball with a 2.95 team ERA after the All-Star break, then you have all the makings of momentum heading into 2015. That is, if you believe in things like — momentum.

It’s a little too early to hop on any bandwagons just yet. We haven’t even begun to see players showing up in the best shape of their lives for Spring Training. Hell, we haven’t even seen the staff anchor of a World Series team pick an employer for 2015 and beyond. That is to say, a lot of things around baseball are still taking shape, so the lens isn’t yet as focused as it might be as the regular season inches ever closer.

It’s entirely possible that Corey Kluber will be the first Indians player off the board in some fantasy leagues. Defending Cy Young Award-winning pitchers have a tendency to inflate public opinion. And after having displayed the ability to make a serious run at the pitching triple-crown, no one could fault Fantasy owners for wanting Kluber’s services.

However, with pitching in such abundance, generally speaking, owners might be well advised to first turn their collective attention to some of Cleveland’s somewhat unheralded hitting commodities.

The aforementioned Brantley possesses a rare combination of power and speed and for those owners who couldn’t afford an Andrew McCutchen, Brantley could be a nice consolation prize, even if a correction in batting average is to be expected. He’ll be firmly entrenched as the Tribe’s No. 3 hitter and with a healthy Bourn and Kipnis hitting (and running) in front of him, Brantley should have plenty of RBI opportunities.

Speaking of opportunities, Carlos Santana still qualifies at catcher, and Fantasy owners should attempt to draft him with that in mind. While his batting average (.248 career) is nothing to write home about, he brings top-tier power for his position and his .367 career OBP plays well in leagues where such details matter. He gets on base, drives in runs, and has played in at least 152 games in three of the last four years.

Trevor Bauer’s arm is already a star and his long-toss regimen is already in baseball’s unofficial hall of fame. If he ever pitches up to his abilities, he’s going to be a bona-fide star. His 1.45 WHIP needs improvement before he can be anything more than a late-round selection, but the strikeout potential is there. This is one of many Cleveland starters that could prove to be difference makers in 2015.

Danny Salazar was supposed to break out in 2014, but poor command cost him that opportunity early on. In fact, he struggled so mightily that the team sent him to the minors to “figure things out.” He did, to a degree. The 25-year-old hurler finished the season with 110 major league innings pitched and 120 strikeouts (a 9.8 K/9 for those keeping sore at home).

The highlight of Salazar’s 2014 season came against the division rival White Sox where he somehow fanned 10 batters in just 3.2 innings. Fantasy owners really overspent for his services at this time last year, and those with sour tastes in their mouths may be less inclined to pay top dollar yet again. Which is to say, there’s bargain potential here, depending on your league.

If anyone is wondering WHY the Indians staff ERA was so low after the break in 2014, the easy answer is Carlos Carrasco. This former top prospect was virtually unhittable down the stretch finishing the year with a 1.30 ERA and 78 strikeouts over his final 69 innings. He’s now two years removed from Tommy John surgery and seems to have regained ALL the promise he had before seemingly flaming out. He’s remade himself on the mound, adding an effective slider and improved control. Be careful, however, as his talents are widely known and the price could outpace his sleeper-status.

The experiment of Carlos Santana playing 3B is mercifully over. He was overmatched at the position, and his hitting clearly suffered when he was asked to do more than he was able. Moving to a nearly full-time 1B (with some occasional catching duties), Santana should be in the lineup every day and is a lock to hit 25-plus home runs. However, he’s a batting average risk and if he’s drafted at any position other than catcher, his total fantasy game becomes fairly pedestrian by comparison. If that AVG takes another dip, a trend among aging catchers to be sure, his value could suffer.

Lonnie Chisenhall hit .393 in the first half, making him one of the hottest WTF adds of 2014.  Yet the upswing could only last for so long, as Chisenhall hit just .219 thereafter. While batting average certainly isn’t the be all, end all of fantasy success, it is one indicator of Chisenhall’s inconsistency, That inconsistency is compounded by a relative lack of poser at the hot corner, a quality you certainly do not want in an American League 3B. The truth is probably somewhere in the middle, which is to say middle of the road. Chisenhall is not going to hit .393, or .343. He’s probably not going to hit .300. And he’s definitely not going to reach 20 HR. But, if a .270/.320/.420 player is what you need, then THIS is your guy.

It’s highly unlikely that shortstop Francisco Lindor will be on Cleveland’s opening day roster, but we’re sure to see him at some point in 2015. His glove is ready for prime time, although his offensive game is still a work in progress. While he hit a respectable .278 in Double-A and .273 following a Triple-A promotion, he has yet to fully grow into the hitter most scouts see him becoming. There’s a lot of upside here, and while it’s tough to make promises about 2015, Lindor seems more than capable of developing into an All-Star. In the short term, expect the 20-year-old to be a mid- to late-season call-up who will fit in defensively and offer a pro-rated 20-25 SB potential.

What Should You Know About the 2015 Cleveland Indians?

If championship-caliber baseball is predicated upon high batting averages, then the 2015 Cleveland Indians team may have a tough time even flirting with .500, because most projection models foresee just one tribe hitter, Michael Brantley, carrying an average north of .270.

The lineup is constructed with left- and right-handed versatility, with some switch-hitters thrown in for good measure. Providing everyone stays healthy, this is a team that has the ability to get on base, and hit more than the occasional home run.

Ultimately, this team will have to pitch the way it did in 2014 to have any shot at success, which bodes well since the talent is surely there. With the reigning American Cy Young Award winner, and a stable of live, young arms, the staff has the ability to approach elite status.  Should they falter, the Indians will have to rely heavily on their bullpen, which featured three of the top five hurlers in the AL in terms of appearances. Their closer, Cody Allen and fellow right-handers Bryan Shaw and Scott Atchinson all appeared in 70 or more games, as did newcomer Mark Rzepczynski, one of the team’s only lefties.

Top to bottom, this roster is far more talented than the Kansas City team that ended up representing the AL in the 2014 World Series. If everyone is relatively healthy, and the rotation can ease the use of the bullpen, there is real reason to have high hopes for the 2015 Cleveland Indians. 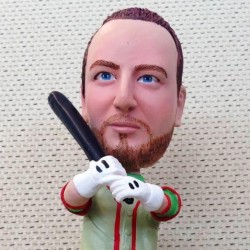 2015 Minnesota Twins Team Preview: Fantasy 30 For 30
Running With The Bulls: Prices for the Top Fantasy Baseball Players for 2015