As the Philadelphia faithful awaits the dawn of a new era of Phillies baseball, a front office headed by the incompetent Ruben Amaro Jr. takes painfully slow strides towards turning over the roster. Hamstrung by a litany of bloated contracts handed out to diminishing veterans, the Phillies are in desperate need of an infusion of young talent.

Following the trade of veterans Marlon Byrd and Jimmy Rollins — both of whom returned significant profit on Draft Day investment last season — Chase Utley remains the only offensive option that can be invested in with any confidence.

The outlook is a bit rosier for the rotation and bullpen, but things can — and should — change quickly as the team attempts to get younger.

While hopping in our short-range time machine, Fantasy owners can drool over the fiercest 3-4 combo in major league baseball in Utley and Ryan Howard. Problem is, it’s not 2007 anymore. Despite a chronic, degenerative knee condition that at one point looked likely to rob Utley of his twilight years, the gritty second-sacker has gutted his way into a graceful decline phase. He’s no longer a perennial MVP candidate and lock as a top-30 overall selection, but Utley finished the 2014 season as a top-10 option at second base on the strength of a .270-74-11-78-10 5×5 line.

Much less optimism surrounds his partner in crime, Howard, and the rest of the Phillies lineup that has been stricken with inconsistent performance throughout. Utley may not be a true stud anymore these days, but is a plenty attractive pick when compared to the wasteland that surrounds him in the lineup.

At the moment, we can continue the stud conversation in the rotations with ace Cole Hamels, but it is no sure thing that Hamels will still be calling Philadelphia home come Opening Day.

At this point, a preseason trade appears unlikely, but Hamels will be on the move at some point, leaving his full-season projection a bit hard to peg.

Plenty of people out there will tell you to trust the skills and ignore the record, and that’s just what you have to do with Hamels. He’s not a top-five pitcher in Fantasy, but Hamels is pretty darned close.

Cliff Lee could fall in almost every one of the categories below, but we’ll play the optimistic fan and call him a Fantasy stud.

When healthy, he and Hamels provide as formidable a top-of-the-rotation pair as you are going to find. Lee was far from that in 2014, however, suffering from an elbow injury that hampered his effectiveness while limiting him to 81 innings pitched.

Prior to the disastrous 2014, Lee had established himself as one of the most consistent starters in baseball, averaging 222 inning per season with a 2.89 ERA and 1.09 WHIP from 2008 to 2013. His health and ADP will be something to keep a close eye on in spring training, as a healthy Cliff Lee could prove quite the value pick as timid owners shy away from his shaky health and awful team.

When searching for players ready to make the leap in Fantasy, skill and opportunity are the factors to zone in on. Many prospect hounds will drool over Maikel Franco power bat — but he’s unlikely to even sniff the big league roster until later in the season.

The true breakout potential lies in the bullpen for the Phils. Rumors have been swirling in recent days that Jonathan Papelbon could be on the move and if/when that happens, 24-year-old fireballer Ken Giles should take residence at the back end of the Philadelphia ‘pen for years to come.

Even terrible teams win games — and close games at that. If given the Opening Day nod, Giles is a legit candidate for 30 saves and 70 strikeouts.

On the flip side of the above equation, Papelbon entering the season as the Phillies’ closer could also provide some nice sleeper potential. It’s odd to say that about a player who was a consensus considered a top-three option at his position just a few years ago, but the team context and Papelbon’s declining skills will suppress his Draft Day cost. It’s painful to admit, but Papelbon will more than likely be a Draft Day value and his 30 saves will turn you a profit.

Chad Billingsley is a late addition to this section, as he inked an incentive-laden $1.5 million deal with the Phillies just as we were headed to press. When we last saw a healthy Billingsley, he posted a 3.55 ERA and 1.29 WHIP in 25 starts in 2012 before being limited to just two starts in 2013.

Elbow/forearm troubles have cost him the majority of the past two seasons, but he is optimistically expected to be ready in April and makes a nice pickup for a talent-starved team. Billingsley is unlikely to be drafted in any type of standard league, but has a track record that bears watching as he works his way back to full strength.

For a team riddled with risk, it’s fairly unlikely that you are wasting a top-100 pick on any Phillies player other than Hamels, and really, it’s hard to call anyone a bust after that.

Ben Revere is a decent speed option, but anyone waiting on him taking the next step will be disappointed. A contact hitter with minimal pop, Revere lacks the on-base ability to provide truly elite speed and/or run totals. He suffices as an NL-only play, but Revere is unlikely to be part of my plans on any mixed-league roster.

Prospect slugger Maikel Franco, who emerged as one of baseball’s elite offensive prospects with a breakout 2013, is the rookie to keep an eye on in Philly. Though, he struggled early in 2014, Franco came on strong down the stretch and carried over his solid work into the Dominican Winter League, batting .337/.344/.570 in 22 games.

Unfortunately for the 22-year-old Franco, there is no immediate path to playing time with Cody Asche and Ryan Howard penciled in as the Opening Day corner infielders.

Franco will get a look during camp in the spring, but GM Ruben Amaro is already on record saying that Franco is likely to start the season in the minors. The financial implications for a rebuilding team and Franco’s poor plate discipline will make that an easy decision to justify. When he does arrive — and adjust to major-league pitching — Franco projects as to be a 30-homer bat and steady run producer at the big league level.

What Should We Know About the 2015 Philadelphia Phillies?

It’s going to be another frustrating season for both Phillies fans and Fantasy owners who over-invest in this squad.

On the one hand, the healthy pair of Hamels and Lee at the top of the rotation backed by the bullpen we saw dominate down the stretch in 2014 is enough to keep any team in the wild-card conversation despite an underwhelming offense.

If the Phils do over-achieve, it will more likely provide the ammo for Amaro and the front offense to recoup some value from some of those hefty contracts doled out in the wake of a championship hangover.

Of course, I’ll keep watching — cause that’s what us Philadelphia fans do — I just can’t recommend you make a hefty investment in any of the talent that the team will trot out there in 2015.

Wayne Bretsky runs the show over at BretskyBall.com and can also be found sipping whiskey and chatting fantasy on a weekly basis throughout the baseball season on the Box Score Baseball podcast. 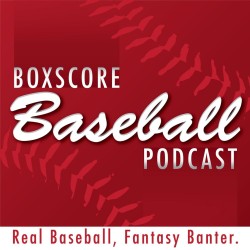