5 Fantasy Football Players On the Rise After 2018 NFL Draft

Before I dig into this Fantasy Football players on the rise piece, I wanted to reminisce about some memories from my childhood that helped create this Fantasy obsession of mine.

Back in the day, I collected sports cards – mostly baseball cards (remember when baseball was popular!?!). And some of my greatest childhood memories revolved around opening packs of cards. What if I opened a pack and found a Don Mattingly rookie card!?! (Who doesn’t love sleeper rookies?) Or what if I got another Bucky Dent card – my favorite player!?!

As I grew older, I found out I should hate the Yankees (the Rays began back in 1998!). I also found that whenever I open a pack of cards (very rare these days), I get that same feeling. The feeling of “what might become!”

That’s what we’re tapping into with this article on Fantasy Football players on the rise.

What’s better than drafting a player in the middle or late rounds of a Fantasy Football draft, only to watch him explode and give you value much greater than the round he was drafted. Let’s take a look at – what might become!

5 Fantasy Football Players On the Rise

Our Mark Strausberg also broke down some key Fantasy players impacted by the 2018 NFL Draft, but this batch below are my early Fantasy faves.

No, no, you won’t be lulled into thinking he has a chance to break out into a top-five Fantasy quarterback again, not after you got the rug pulled out from under you last season. But the addition of Ronald Jones Jr. out of USC should give Winston another weapon he didn’t have last season. That’s without even mentioning the addition of center Ryan Jensen, who allows Ali Marpet to move back to right guard, where he dominated, rather than battle with learning the center position (where he struggled).

Winston has all the weapons he had last season (stud go-to WR, speedy deep threat, two baller tight ends), and now he has a better running game and improved offensive line. The best thing about Winston’s Fantasy value is that people will discard him because he disappointed them last season.

What’s the one thing we knew about McKinnon in his first couple of seasons in the NFL? He has speed to spare. Then we learned over the past couple seasons that he’s a great weapon in the passing game (94 catches since 2016), and despite being under 5-foot-10, he can take a pounding (just one missed game in the past three seasons). He signs with the 49ers to run the ball for second-year head coach Kyle Shanahan, who had great success with a similarly sized running back with Devonta Freeman in Atlanta. That makes him one of our favorite Fantasy Football players on the rise.

Currently, McKinnon is lined up as the team’s three-down back – including goal-line carries. His ADP is relatively high for this list (3.09), but it’s not unthinkable that he’ll be an RB1 by season’s end.

#49ers practice is over. My biggest takeaway: Draft Jerick McKinnon early in your fantasy league. He caught a lot of passes from Jimmy G.

One sophomore on the rise is Williams, who averaged a meager 3.6 yards per carry in 2017. If we take a closer look, though, we see he was a top-10 fantasy back from Weeks 10-17, after Ty Montgomery got injured, forcing the Packers to essentially make Williams their featured back. Montgomery is expected to return healthy, but this running game will likely run through Williams and fellow sophomore RB Aaron Jones. Williams is my pick to produce the most Fantasy points from Aaron Rodgers’ backfield, which makes him a nice option as one of your backup RBs. His ADP ranges from late sixth round on FantasyFootballCalculator to late 10th round on MyFantasyLeague. That wide range allows you to take advantage – depending on which sites you end up drafting on.
Embed from Getty Images

When the Cowboys signed Hurns this spring, his Fantasy value was kinda meh – but it has since improved considerably, as Dallas let Dez Bryant go just a few days after Hurns’ signing, and Jason Witten chose to retire about one month later. Hurns looks like the obvious starter alongside Terrance Williams, who is dealing with off-the-field issues currently, but Hurns hasn’t done much since his breakout sophomore season in 2015. He has just five touchdown catches over the past two years combined. Dallas did draft WR Michael Gallup, who’ll need some seasoning, but that just makes it more likely Hurns produces better than the WR5 status he’s currently being drafted at – as long as he stays healthy. 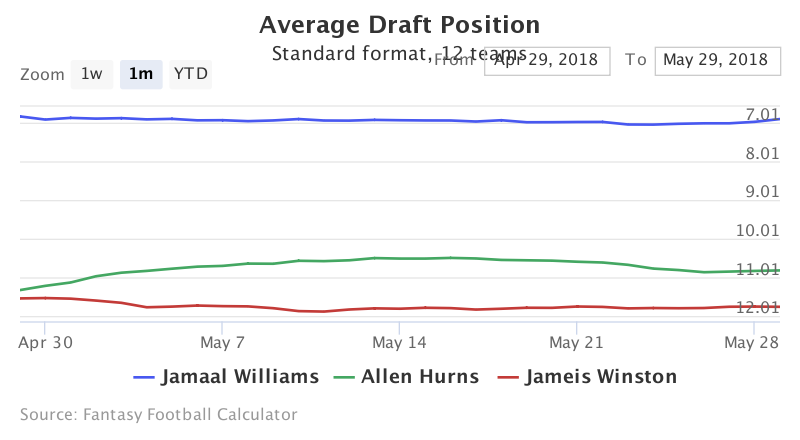 The Dolphins replaced Jarvis Landry with the former Chiefs wide receiver, which is like getting a blind date with the chess club president after a cheerleader became unavailable. Wilson won’t get the same number of targets as Landry, but very few slot receivers do. Ryan Tannehill is back from injury, and while the Dolphins are going to lean on their rushing game, it’s tough to envision them not being forced to throw the ball a lot in the second halves of most games.

Wilson is barely on the ADP radar (Round 21), which makes him someone to consider with your last non-kicker/DST pick in larger leagues. For other leagues, keep him in mind if someone gets hurt mid-preseason.

This handful of Fantasy Football players on the rise will likely fluctuate up and down the ADP scale over the course of the summer, but my guess is they will end up providing better value in-season than most expect in the preseason. Do you have any of these players among your list of potential keepers? Got a question about who you should keep entering the draft season? Ask our SCFE Fantasy Football experts – for free!

Follow DG
David Gonos
Co-Founder at SoCalledFantasyExperts.com
David Gonos has been writing about Fantasy Sports online since 2000 – and playing Fantasy Sports since 1989. He has drafted both Curt Warner and Kurt Warner, along with Big Unit and Big Papi. A veteran of hundreds of drafts in the past 15 years alone, Gonos is closely acquainted with sleepers, breakouts and busts – as he has drafted many of all three. He was a Senior Fantasy Writer for CBSSports.com for five years, and he has been columnist on SI.com and FanDuel.com, while also getting published on MLB.com, NFL.com, FoxSports.com and USAToday.com.