There is not one Roto drafting strategy that can guarantee victory. There are, however, some recommended Draft Day philosophies. The following strategies are directed towards Rotisserie (Roto) leagues.

Waiting on pitching is common strategy for several reasons. First there are simply more hitters on a roster than pitchers. Therefore more value is placed on hitters. A second reason to pump the brakes when it comes to drafting pitchers early is the quality of pitchers to be found late in drafts or in free agency. There are typically more pitchers that emerge from obscurity and are available to pick up than hitters. Finally, pitchers arguably carry more injury risk. With the trend in Tommy John surgeries plaguing the league most owners feel more safe taking high end hitters than pitchers.

No position has more turnaround and midseason change at the position than closers. This allows owners to wait on drafting closers, and then to pounce on the new closer during the season.

The Wait on Pitching Disclaimer: Fantasy leagues are flush with dominate pitchers these days. This can help argue FOR waiting on pitchers, but it can also mean if an owner does not get some high-end pitching they can get buried. Waiting on pitchers is important, but owners will need to get some higher end pitchers to stay afloat. Secondly, if an owner is not confident in their ability to identify emerging pitchers in the late rounds or in free agency, the waiting-on-pitchers strategy is less appealing. Part of the strategy relies on owners ability to identify and pick up these pitchers.

Drafting for power is another recommended strategy. Power production has gone down in Major League Baseball recently. The 40-home run hitter has become a baseball unicorn. Drafting power is best done in the early rounds. Each year, there are some players who provide power late in drafts, but they often lack good batting averages.

The Drafting-for-Power Disclaimer: When drafting for power, owners will more than likely be making sacrifices in the stolen base category. This is, however, another statistic that can typically be found in free agency or late in drafts. The Rajai Davis types can help make up for lost speed, while still capitalizing on the power outage. Batting average can also suffer from drafting for power, but may be one of the hardest statistics to accurately project.

Putting These Ideas Into Action

Rays pitcher Alex Cobb might not be a sexy pick this season, but opponents had just a .285 slugging percentage against him in 2014. Photo Credit: Keith Allison

Drafting one ace and one potential ace will help keep a team’s pitching afloat while waiting on pitching.  This means at least one pitcher in the first four to five rounds, and your potential ace soon after. The potential ace should be a proven guy with some upside or bounce back potential. This is not a Yordano Ventura-type pitcher, but more like an Alex Cobb/James Shields type of pick. There will be more opportunities to draft young, high-upside pitchers in the mid-to-late rounds. One closer in the teen rounds isn’t a bad idea, and there are usually closers on bad teams or in a position battle that you can take a gamble on in the late rounds.

Draft power early in the first five rounds. Most first round players will contribute to all of, or most categories. Try to maintain some balance in the early rounds, but make sure to get power. While this Roto drafting set of tips won’t win you a title on its own, it will get you well on your way. 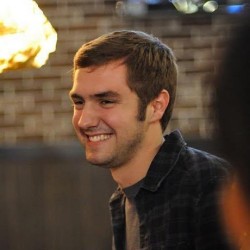 Follow Dave
Dave Albin
Writer at SoCalledFantasyExperts.com
Dave earned his degree in communications while slaying dragons and taming unicorns. During the dragon offseason, he enjoys writing and playing Fantasy Baseball.