Second-Year Players To Target In 2017

Since the 2000 NFL season, no second-year players have seen more targets than Brandon Marshall with the Denver Broncos in 2007. He led the NFL in targets (two more than T.J. Houshmandzadeh), but caught just 102 (fifth most) of those targets for just a 60% catch rate.

Marshall finished with 1,325 yards and seven touchdowns, good for WR10 in PPR. Nine of the Top 12 sophomore leaders in targets have occurred since the 2010 season. Which second-year players should you target in drafts this year?

Second-Year Players To Target In 2017

In 2009, Chris Johnson rushed for 2006 yards as a second-year player and last year David Johnson scored 20 touchdowns in his second season. I don’t think Elliot will see 30 more carries this year to reach CJ2k’s 358 attempts, but I will say this – if the Cowboys ever turn him into a focal point of the passing game, he could reach LaDainian Tomlinson levels of unfairness.

Jordan Howard did a lot in a short period of time last year and is worth that early second round pick. If he sees an increase in those 50 targets, he could finish as high as RB7, ahead of Melvin Gordon and Jay Ajayi.

Paul Perkins is now the RB1 on the Giants depth chart, after rushing for 456 yards as a rookie on 112 attempts. He is the only sophomore running back taking over as the teams lead back, and that by default makes him a risky pick, even with an ADP of 71.7. Despite the teams crowded backfield, I would much rather draft Mark Ingram, Frank Gore or Eddie Lacy.

Please stop drafting Derrick Henry 80th overall! If you want to handcuff DeMarco Murray that is one thing, but no need to do so in the seventh round! Same with Kenneth Dixon at pick 103. Not only is he suspended four games, but the Ravens have Terrence West and added Danny Woodhead to the mix. On top of that, no team ran the ball less often than the Ravens in 2016.

Michael Thomas is coming off draft boards early in the second round, between veterans Jordy Nelson and T.Y. Hilton and ahead of Dez Bryant and Amari Cooper. Thomas saw 121 targets as a rookie and Brandin Cooks was shipped to New England. With a 76% catch rate, Thomas could improve on a 92/1,137/9 rookie campaign with a heavy increase in targets.

Hill is in a very similar situation as Thomas, with Jeremy Maclin being let go and Hill taking over as the WR1 on the team’s depth chart. Andy Reid used Hill in all types of ways last year, and we saw just how explosive he can be in the open field. He owned a 73.5% catch rate on 83 targets at 7.14 yards per target. He is currently being drafted in the middle of the fourth round as the 22nd WR off draft boards.

Despite his talent, Corey Coleman’s ADP (110) is too high for me. I would rather have Marvin Jones, Adam Thielen, or his teammate Kenny Britt.

Sterling Shepard had a nice rookie season and was a ninth round pick in early mock drafts before New York added Brandon Marshall to its receiving corps. Shepard has dropped into the 12th round, after seeing 105 targets last year and scoring eight touchdowns. Victor Cruz saw 70 targets as the WR3 last

Victor Cruz saw 70 targets as the WR3 last year but caught just 53% of them. If Eli Manning continues to spread the ball around, out of the slot, Shepard can still prove to be a valuable WR in Fantasy Football. I want him before fellow classmates Josh Doctson, Kevin White, Breshad Perriman and Will Fuller.

Hunter Henry averaged 9.02 yards per target last year, second best by a rookie TE since Gronkowski (9.25) in 2010. Henry was just the 19th TE to average more than nine yards per target since 2010. Henry scored in 8 of the last 10 games he played and with an aging Antonio Gates on his way out, Henry’s stock is on the rise, yet his ADP continues to fall. That’s good news for owners that are playing the waiting game on a deep TE position.

Austin Hooper will take over as the Falcons top TE with Jacob Tamme gone. That opens up 30 targets, twice as many as he saw as a rookie. Tamme was also targeted 10 times in the red zone as well which should help Hooper increase his TD totals. I bet Hooper is one of the most added TE via waivers this season. 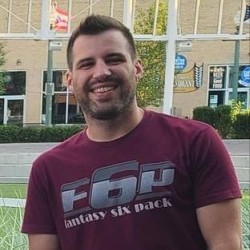 Follow Keith
Keith Lott
Founder at WeTalkFantasySports.com
Keith is the founder of We Talk Fantasy Sports and you can follow him on twitter @WeTlkFntsySprts.At We Talk Fantasy Sports, they have one goal -- to help you win your league. It does not matter if you are a Fantasy rookie or a veteran. Everyone has questions, and they have opinions. Lots of them!